Design thinking is a term whose use has spread more and more in recent years, finding application in academic, entrepreneurial, managerial, and social fields. As a result, its definitions have multiplied, leading it to become an "umbrella term" that risks meaning something profoundly different depending on who uses it. The controversial nature of its characteristics, areas of expertise, and the diversity of the actors that constantly redefine the term make the territory of discussion particularly complex and dynamic. In fact, several initiatives have been undertaken to investigate and return visions of design thinking as a phenomenon: observatory Design Thinking for Business, Design&Thinking movie, The Business Value of Design or Hasso Plattner Design Thinking Research Program, to name a few.

This has been the starting point of my Master Thesis - supervisor by Paolo Ciuccarelli and co-supervisor by Michele Mauri -, set with the aim to offer a new point of view on this controversy. 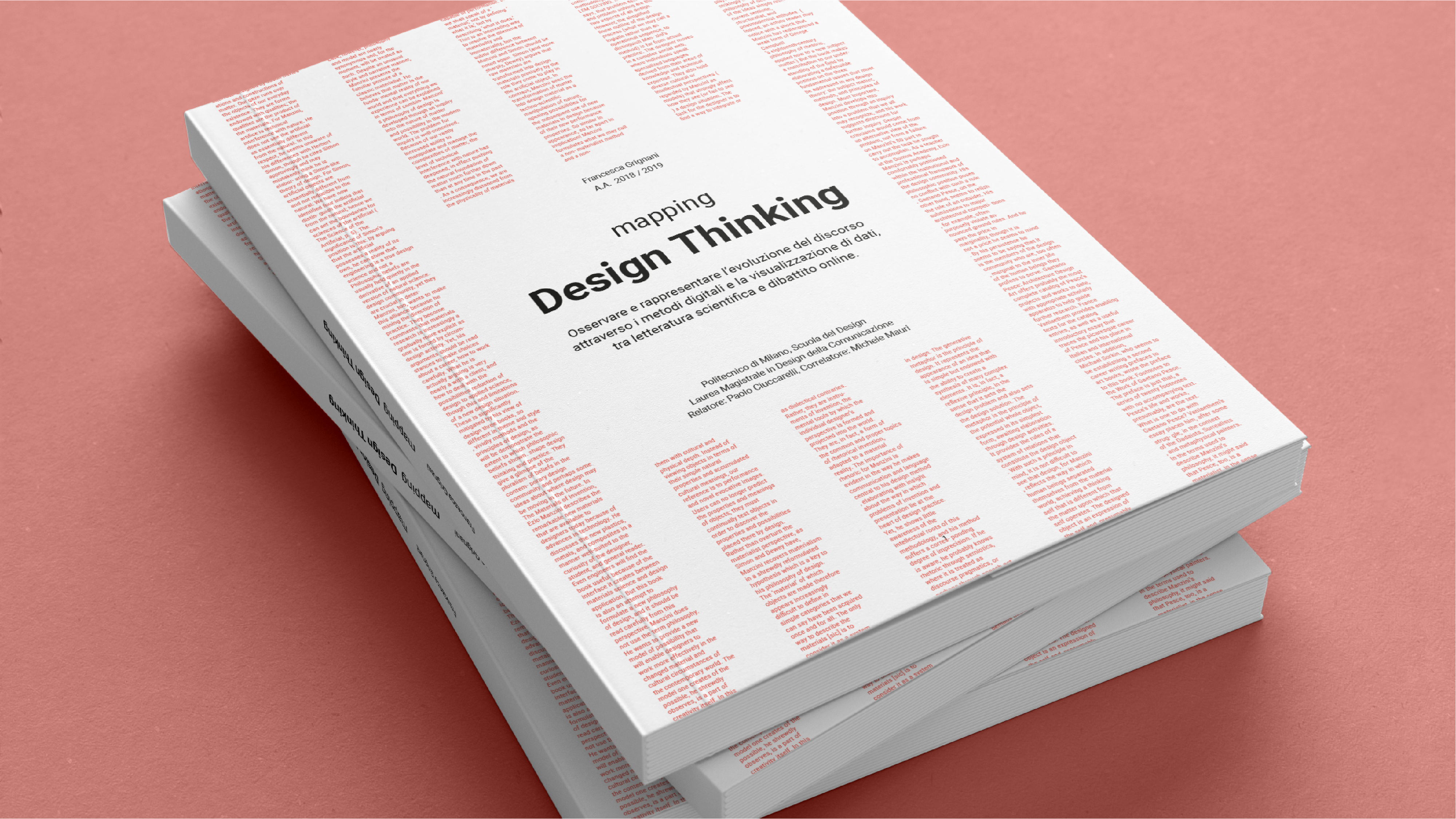 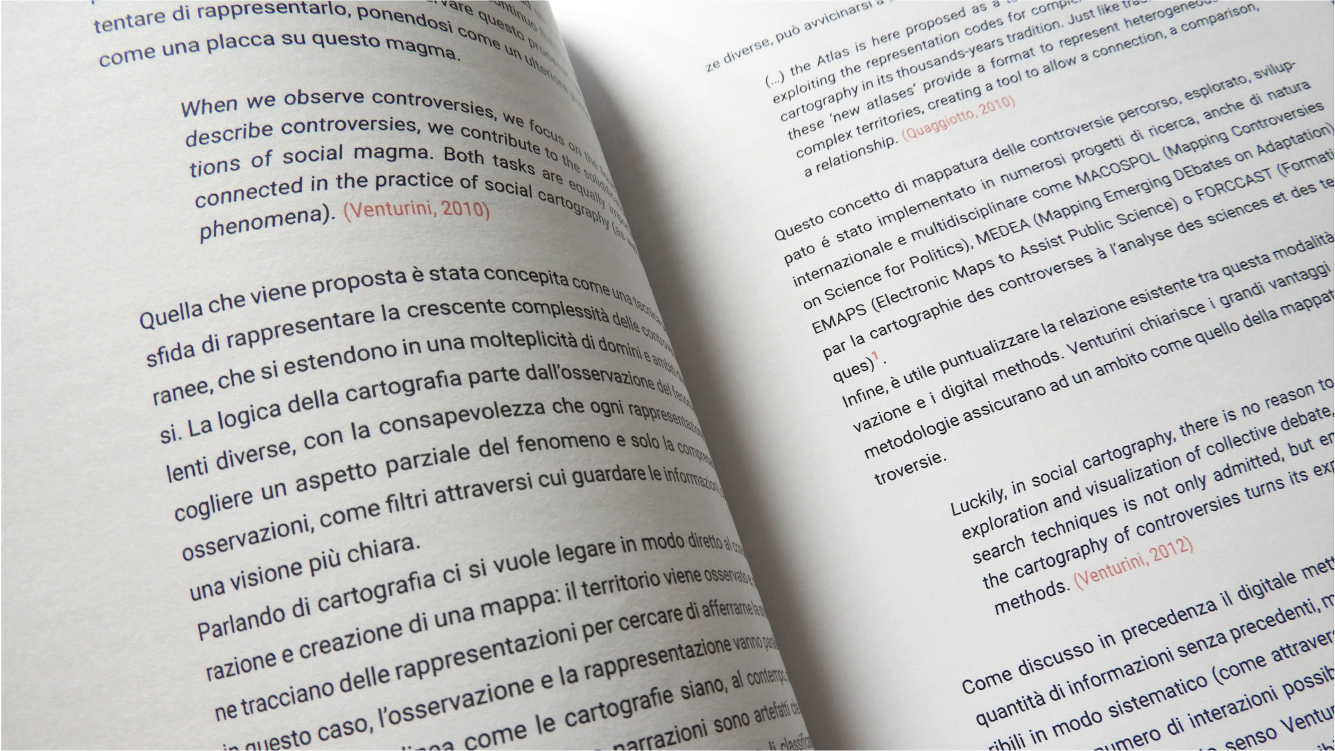 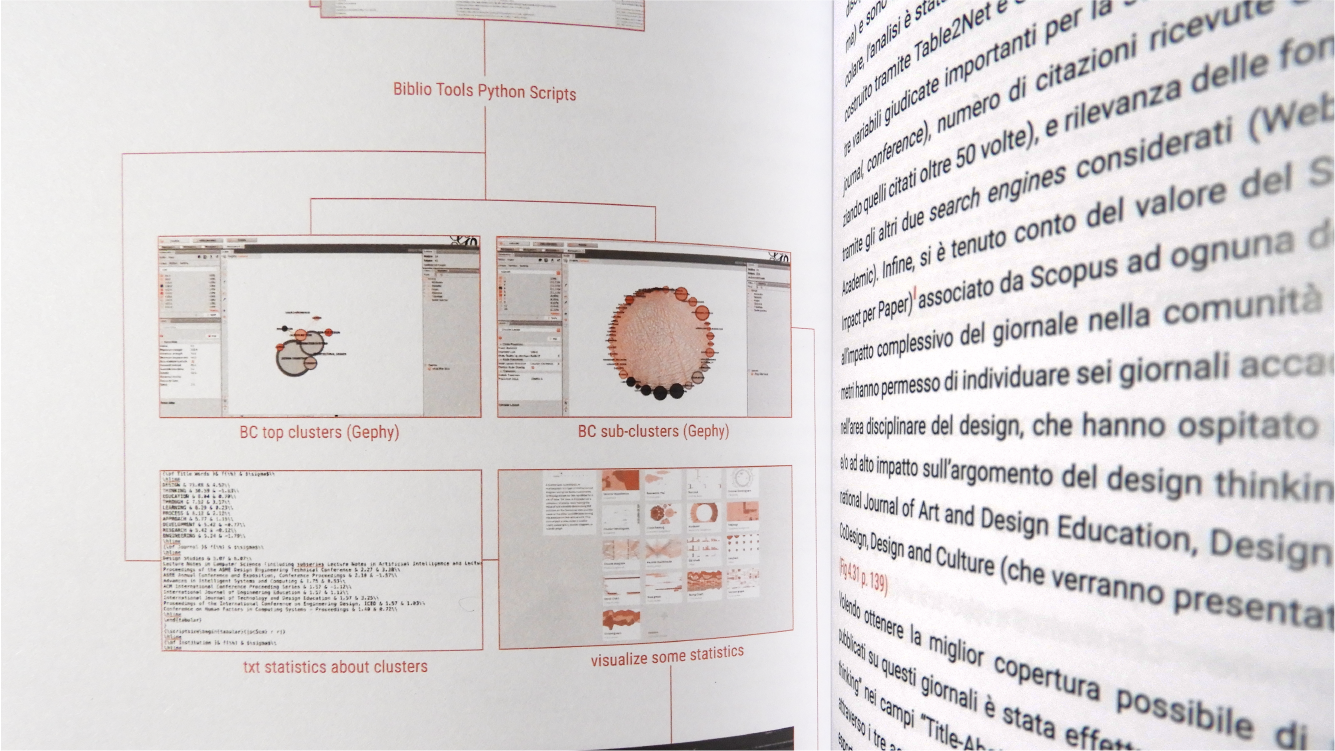 In digital methods, natively digital data and methodologies are re-proposed for social research finality. For this reason, they represent a unique resource in mapping disputes. In my research, those methods have been used in the attempt to get snapshots of the current state and evolution of the discussion surrounding design thinking. The challenge has been to uncover and make visible the connections between actors, disciplines, and words that constantly shape the meaning of the term. Those analyses have been conducted, first of all, to return an inspectable representation of the debate to the multiple actors that take part in it: researchers, consulting firms, and professionals. Besides, this work represented a test for the validity of online-grounded methods in studying this kind of phenomenon and places itself together with other research that considers Design an evolving discipline to observe in its constant changes.

THE PATH AT A GLANCE

Adopting the strategy proposed by digital methods, first have been selected some online environments useful for observing the chosen issue. This happened in an iterative process where the output of one analysis represents the start for the following one. In the end, were chosen: Google, three Academic Search Engines and the online publication platform Medium. For each environment, have been developed specific protocols to extract and visualize data of interest, with logic dictated by the environment itself and making use of online tools.

In particular, the first phase focused on the scientific side of the debate, observing the issue through the Academic Search Engines (Scopus, Web of Science and Microsoft Academic) and using tools drawn from Scientometrics to uncover emerging communities and trends. The scientific discussion within the disciplinary field of design has been further studied by analyzing publications about the topic extracted from relevant design magazines through Natural Language Processing. The following phase started with a crawling operation of Google's first results. This action allowed to spot relationships among a set of actors exceeding the scientific community and highlighted Medium as an environment of interest. Therefore, the most relevant articles shared on the latter publishing platform have been used to start analyzing the public side of the debate. 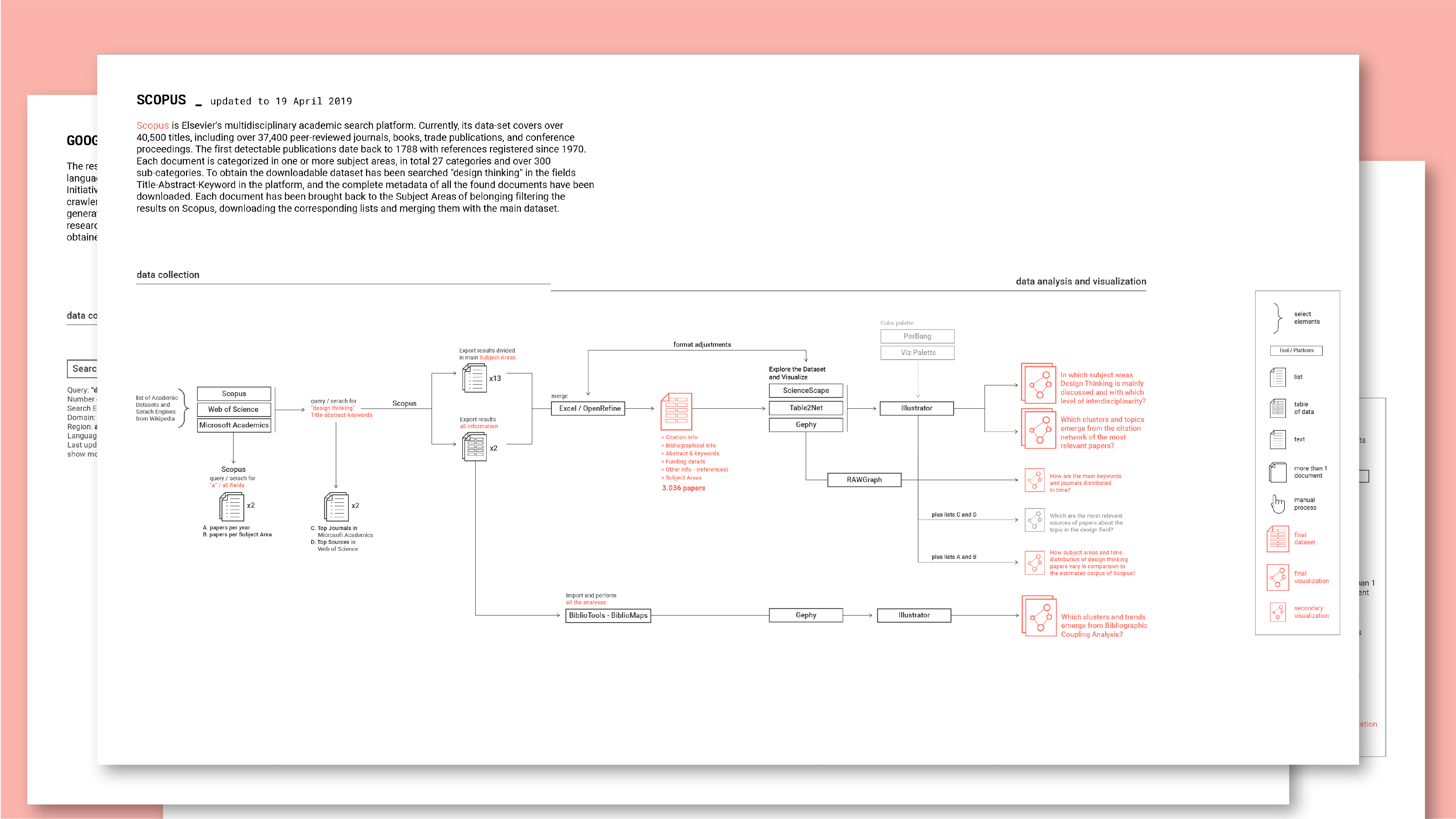 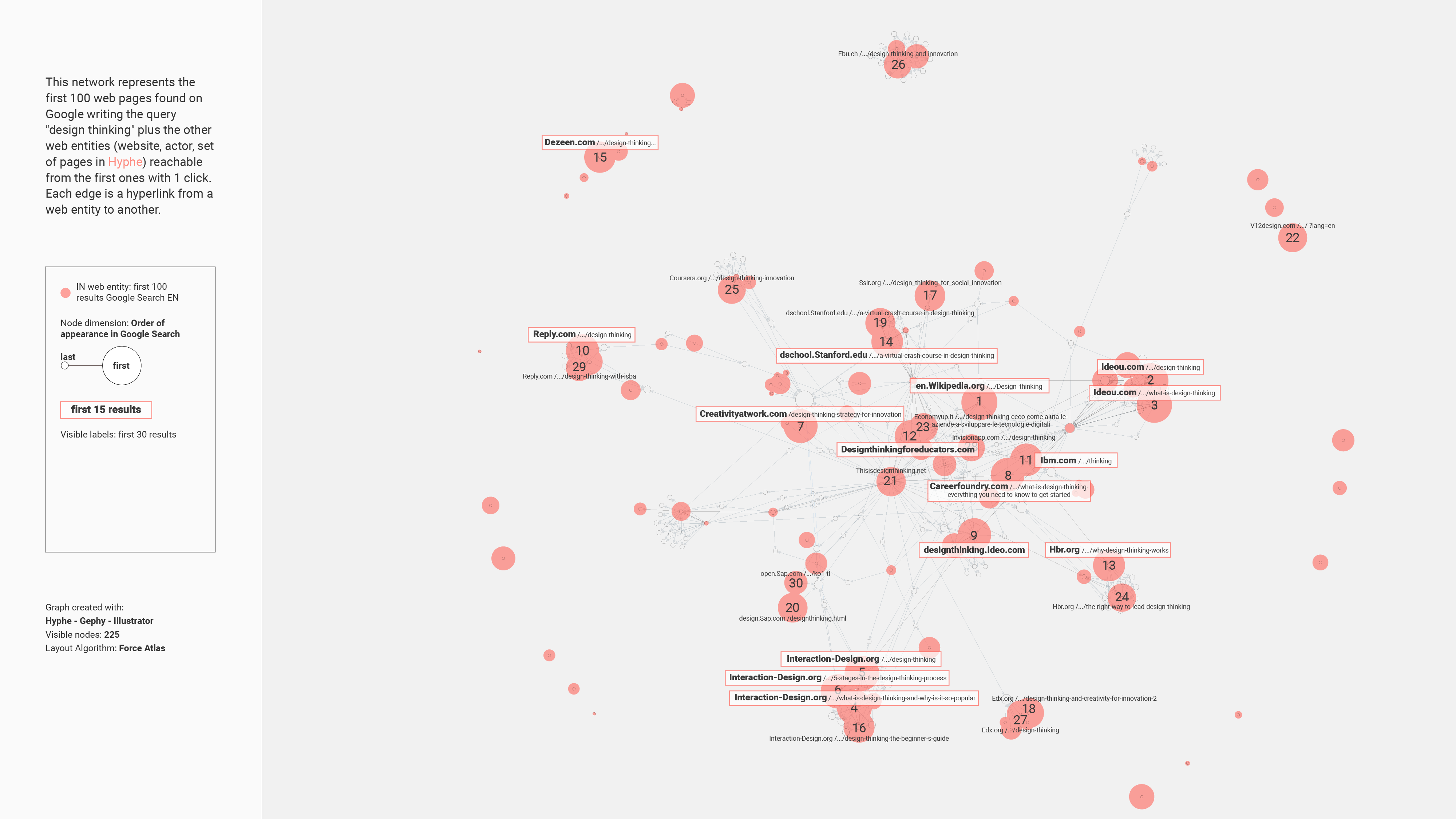 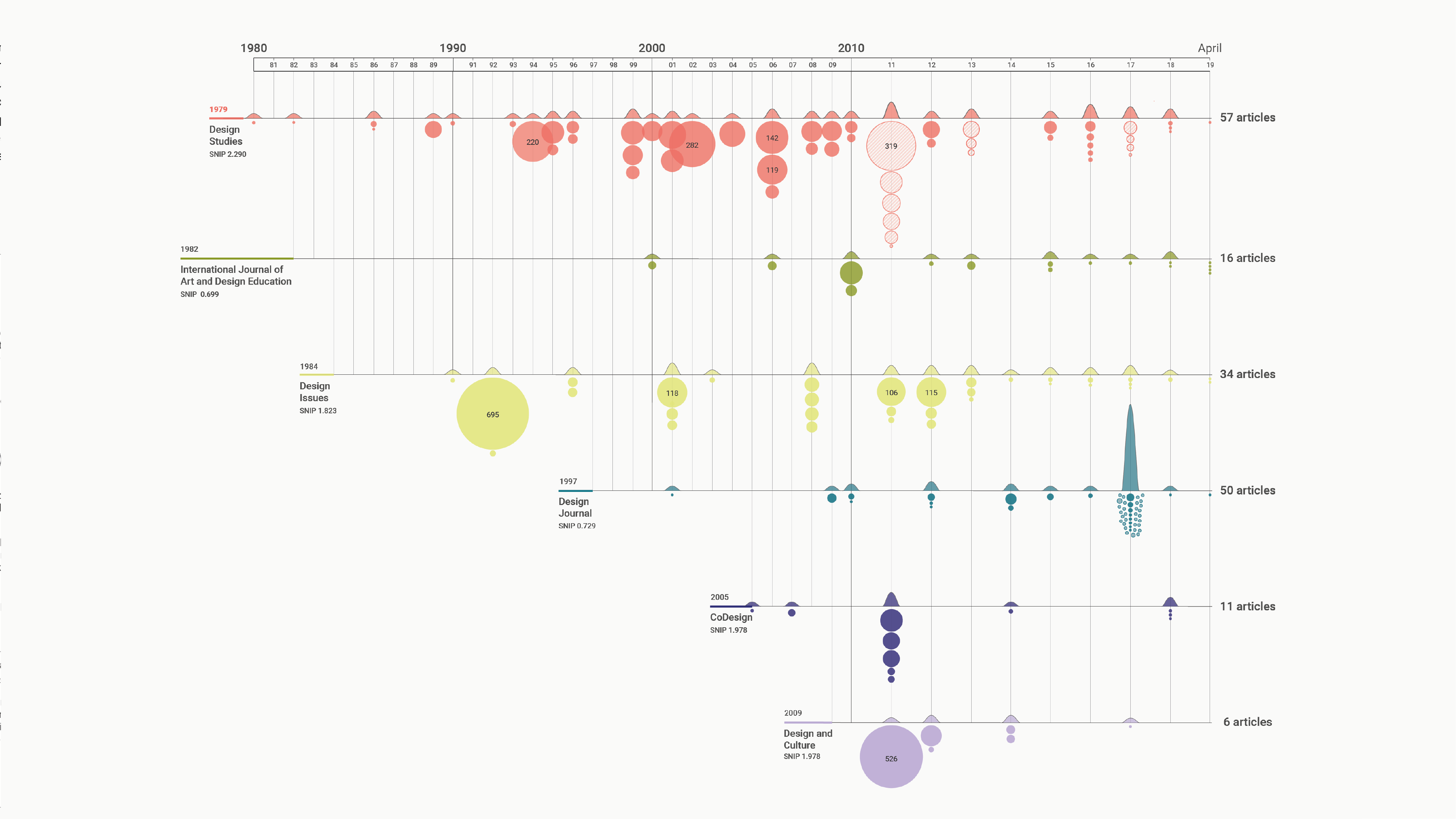 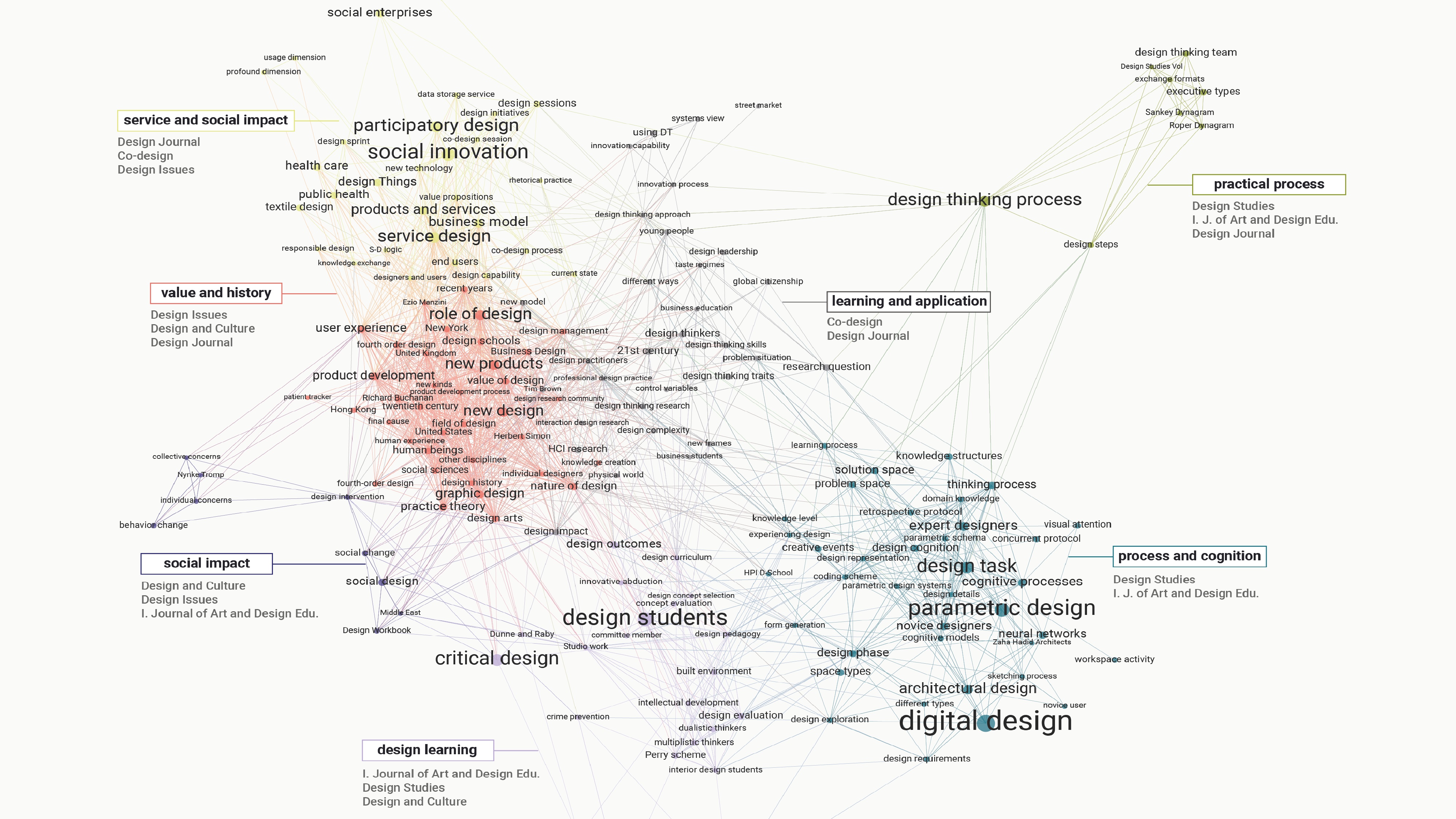 This research brought to light some clear tendencies in the considered debate. For example, a noticeable distance emerged between the bibliographic references of papers that belong to the engineering field and those belonging to the managerial or Design sphere; this leads to suppose the existence of a profound difference between the meaning attributed to the term in the two contexts. Furthermore, the resulting observations overall seem consistent with the historical evolution of the phenomenon and suggest that the chosen methodological approach could offer a valuable contribution to the understanding and dynamic representation of the discourse. The coherence of what emerged has also been confirmed by some experts who had the chance to vision the work, such as a few IDEO partners.

From a personal standpoint, carrying out this research allowed me to deepen my knowledge of the digital method's approach and gain confidence with specific tools and visualizations, for example, networks. However, what I value most is that it redefined my idea of what Design is and its possible roles.


You can have a look at the full thesis at POLITesi archive. The abstract is present also at Politecnico di Milano School of Design, and some images have been used to promote the event Human by Design: Center for Design Launch.